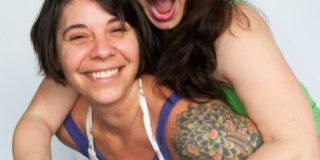 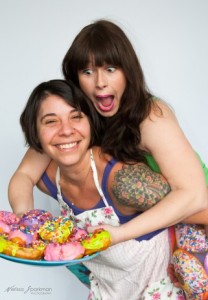 Hi-Five Doughnuts is the sprinkles on the doughnut for ButcherBlock, a nine property mixed-used development in the heart of Butchertown.

The mobile Louisville bakery is opening a brick-and-mortar location at 1011 E. Main St. at the end of this year. Owners Annie Harlow and Leslie Wilson have been wheeling their delectable doughnuts around Louisville in their food truck, “Shelby,” for more than a year, meanwhile keeping their eye out for the perfect storefront.

“Andy Blieden is a relentless man in all the best ways possible,” said Harlow.

“He courted us,” Wilson added.

The ladies have wanted a storefront since the beginning, but the opportunity to have a truck presented itself first. Now that Shelby is going gangbusters, it is the right time to open the store, according to the pair.

“With the storefront, it opens up a whole other level. It’s a game changer,” Wilson said, later adding that at least three out of every five customers asked where they can regularly find Hi-Five Doughnuts.

The store will open at the end of this year or possibly early next year, while the truck is hibernating for the winter. While winter can be a tough time to open a business, it will allow Harlow and Wilson time to get the shop running smoothly before truck season 2017 comes around.

“Shelby is an integral part of who we are,” Harlow said, “so Shelby will be out, but it’s just figuring out when and where.”

With the new store, they plan to hire at least one full-time employee to start as well as get help from family. Harlow half-joked that she planned to pull her mother-in-law, grandma and husband into the business.

For on-the-go customers, Hi-Five Doughnuts plans to offer curbside pickup as well as delivery. The menu will include Hi-Five Doughnuts’ build-your-own bar where customers can pick their toppings as well as pre-made doughnuts such as its custard-filled doughnuts and specialty creations like its fried chicken doughnut.

The store will offer limited seating. Harlow said they want to offer people a chance to sit and enjoy a few doughnuts but are counting on most people getting their fare to-go.

The design of the bakery is still in the works, but one unique detail about Hi-Five Doughnuts’ store will be its front door, which they plan to paint bright pink with sprinkles.

Hi-Five Doughnuts is the last piece of the puzzle for ButcherBlock, which will include a Vietnamese restaurant, a photography studio, a specialty food store and a home goods shop.