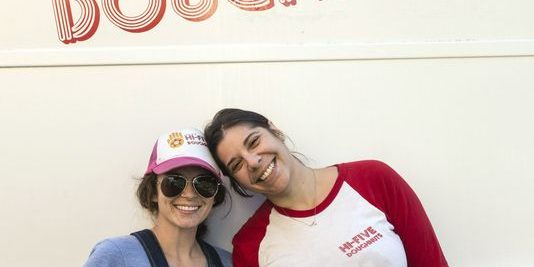 The ladies of the morning are heading to Butchertown.

This week, Leslie Wilson and Annie Harlow – owners of the Hi-Five Doughnuts food truck – announced plans to open a permanent storefront on Main Street near the intersection of Story Avenue by the end of the year.

The co-owners have built a strong following for their gourmet doughnuts since starting operations out of a tent in 2013, and Wilson said it’s the right time for the pair to settle down in a spot where customers can always find them.

“People in Louisville seem to be really stoked and pumped for it, so I think the time is now,” Wilson said.

Harlow and Wilson have always hoped to eventually open a sit-down shop, but Wilson said Hi-Five Doughnuts ventured into food truck territory first because it required less overhead costs to get off the ground.

Now, the owners have signed a lease to build a storefront and office space in a shotgun house as part of the proposed Butcher Block development.

The Butcher Block project comes from a development group headed by Andy Blieden, which filed documents with Metro Department of Planning and Design Services last month outlining plans for a combination of residences, commercial uses, studios and a restaurant in 10 parcels along Wenzel and Main streets.

Wilson said the house that will become Hi-Five’s permanent home stuck out to her and Harlow because it had a large open space and giant front window.

“It just felt right when we walked in,” Wilson said. “You could actually see it all come together. We can see Hi-Five here.”

Wilson said the entire building will have to be reworked to fit the business’s needs, and the co-owners hope to get started on construction following this summer’s food truck season.

Once it’s open, the store will likely have a curbside doughnut pick-up service and a few seats for customers inside and outside the building.

Hi-Five will continue to operate its food truck, but the store will allow Harlow and Wilson more opportunity to experiment and create signature doughnuts.

“It’ll be everything we are now as a truck, just multiply it by 100 in a storefront,” Wilson said.