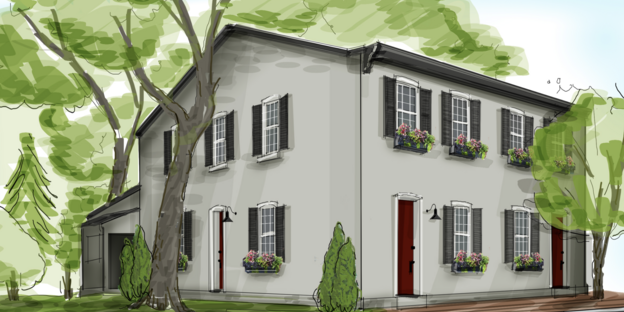 Trey Gossom’s school bus route passed by the residential apartment building at 1658 Story Ave. and Brownsboro Road in Butchertown each morning when he was a child.

Today, Gossom owns the building and plans to quickly transform it into a new urban lofts development he believes will appeal to millennials and other young professionals attracted to the neighborhood’s growth.

Gossom, president and CEO of Trey Gossom Enterprises LLC, has found a niche for his business, transforming older buildings into modern residences in urban areas. He said you can’t easily reproduce the sturdy foundations found in those older buildings.

This project, 1658 Story, is on an aggressive timeline — Gossom aims to have the roughly 4,000-square-foot building rehabbed no later than October for residents to move in. He hopes to keep renovation costs at or below $75,000, but said that will depend on how detailed the project ends up being.

For starters, he wants to make sure the building is structurally sound.

Gossom purchased the two-story structure in June from The Wilhelmi Brothers LLC for $225,000 and has been working with a team of designers and builders to helm his vision that includes local builder Jeff Douglas and interior designer Jessica Mountjoy Schwein of Underhill Smith Designs.

The building needs upgrades both inside and out, and Gossom plans to start on the exterior as early as next week. That will entail a new cream-colored paint job and upgraded wood-stained gutters and doors. Gossom also will replace all the windows with sleeker ones and modernize the entryway.

Inside, he’s still finalizing the floor plan but said he will establish four to six lofts with upgraded flooring, walls, interior finishes and appliances. He also plans to add washer and dryer hook-ups, televisions in each loft and shiplap on the walls. He expects the average size of the one-bedroom lofts to fall between 700 and 900 square feet. Monthly rents are expected to range between $850 and $1,000, and Gossom said the building will be equipped with wireless Internet.

Exposed brick in the building — which dates to the mid-1800s and has previously housed apartments— will be preserved, he said.

Gossom played with the idea of pursuing a commercial concept, such as a coffee shop, but said he believes young professionals in the Butchertown area are looking for small urban apartments in walking distance to restaurants, bars and other entertainment options. Outside, he is planning a modern courtyard and patio with a fire pit and seating.

Butchertown is hopping from a commercial standpoint with the emergence of Butchertown Market, Butchertown Grocery, Copper & Kings American Brandy Co., Butcher Block and the recently opened Butchertown Pizza Hall. The ownership group of Louisville City FC also has 40 acres under contract nearby where it plans to construct a standalone soccer stadium and adjoining commercial district.

Gossom met with local developer Andy Blieden, the man behind many of the commercial concepts in Butchertown, to get his advice on the project and his thoughts on how to preserve the historic character of the structure while infusing it with Butchertown sensibility. Gossom is considering splashing the Butchertown name on the side of the building to show his support for what’s happening there.

“I’m not going to come here and just do my own thing,” Gossom said, adding that he wants to be part of the community and ensure the project complements other developments in Butchertown.

“I’m just trying to build my business and do it the right way,” he said.